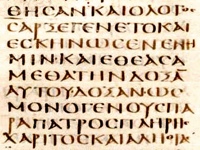 The following article by Hermann Martin Friedrich Büchsel on the meaning of the word μονογενής (monogenes, “only begotten”) is reproduced from vol. 4 of Theological Dictionary of the New Testament edited by Gerhard Kittel, English edition (Grand Rapids: Eerdmans, 1967), pp. 737-41.

“μονογενής occurs in Jn. 1:14, 18; 3:16, 18; 1 Jn. 4:9. What is meant is plainest in Jn. 3:16 and I Jn. 4:9. Because Jesus is the only Son of God, His sending into the world is the supreme proof of God’s love for the world. On the other side, it is only as the only-begotten Son of God that Jesus can mediate life and salvation from perdition. For life is given only in Him, Jn. 5:26. But the fact that He is the only-begotten Son means also that men are obligated to believe in Him, and that they come under judgment, indeed, have done so already, if they withhold faith from Him, 3:18. μονογενής is thus a predicate of majesty. This is true in Jn. 1:18. Here we are to read ὁ μονογενὴς υἱός. (14) As the only-begotten Son Jesus is in the closest intimacy with God. There is no other with whom God can have similar fellowship. He shares everything with this Son. For this reason Jesus can give what no man can give, namely, the fullest possible eye-witness account of God. He knows God, not just from hearsay, but from incomparably close intercourse with Him. In 3:16, 18; 1 Jn. 4:9; 1:18 the relation of Jesus is not just compared to that of an only child to its father. It is the relation of the only-begotten to the Father. Similarly in Jn. 1:14: δόξαν ὡς μονογενοῦς παρὰ πατρός, His glory is not just compared with that of an only child; it is described as that of the only-begotten Son. Grammatically both interpretations are justifiable. But the total usage of μονογενής is very emphatically against taking ὡς μονογενοῦς as a mere comparison.

In Jn. 1:14, 18; 3:16, 18; 1 Jn. 4:9 μονογενής denotes more than the uniqueness or incomparability of Jesus. In all these verses He is expressly called the Son, and He is regarded as such in 1:14. In Jn. μονογενής denotes the origin of Jesus. He is μονογενής as the only-begotten.

What Jn. means by ὁ μονογενὴς υἱός in detail can be known in its full import only in the light of the whole of John’s proclamation. For ὁ μονογενὴς υἱός is simply a special form of ὁ υἱὸς τοῦ θεοῦ. When Jn. speaks of the Son of God, he has primarily in view the man Jesus Christ, though not exclusively the man, but also the risen and pre-existent Lord. The relation of the pre-existent Lord to God is that of Son to Father. This comes out indisputably in 17:5, 24. Jesus is aware that He was with God, and was loved by Him, and endued with glory, before the foundation of the world. This is personal fellowship with God, divine sonship. It is true that neither In the prologue, nor 8:58, nor c. 17 does Jn. use the term “son” for the pre-existent Lord. But He describes His relation to God as that of a son. To maintain that in Jn. the pre-existent Lord is only the Word, and that the Son is only the historical and risen Lord, is to draw too sharp a line between the pre-existence on the one side and the historical and post-historical life on the other. In Jn. the Lord is always the Son. Because He alone was God’s Son before the foundation of the world, because the whole love of the Father is for Him alone, because He alone is one with God, because the title God may be ascribed to Him alone, He is the only-begotten Son of God.

It is not wholly clear whether μονογενής in Jn. denotes also the birth or begetting from God; it probably does, Jn. calls Jesus ὁ γεννηθεὶς ἐκ τοῦ θεοῦ, 1 Jn. 5:18. Though many will not accept this, he here understands the concept of sonship in terms of begetting. For him to be the Son of God is not just to be the recipient of God’s love. It is to be begotten of God. This is true both of believers and also of Jesus. For this reason μονογενής probably includes also begetting by God. To be sure, Jn. does not lift the veil of mystery which lies over the eternal begetting. But this does not entitle us to assume that he had no awareness of it. Johannine preaching and doctrine is designed to awaken faith, 20:30 f., not to give full and systematic knowledge. Hence it does not have to dispel all mysteries.”