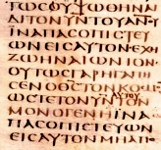 An article by Michael Marlowe on the term “only begotten” (Gr. μονογενὴς monogenes)

“My purpose here is to discuss the meaning of the word μονογενής (monogenes) as used in the New Testament, the Septuagint, and in other ancient writings. I am especially interested in its use by the Apostle John in his Gospel and in his first Epistle, and its use in the Nicene Creed of A.D. 325. I will argue that the rendering “one and only” is semantically reductionistic and theologically inadequate.

“The Greek word μονογενής is an adjective compounded of μονος “only” and γενος “species, race, family, offspring, kind.” In usage, with few exceptions it refers to an only son or daughter. When used in reference to a son, it cannot mean “one of a kind,” because the parent is also of the same kind. The meaning is, the son is the only offspring of the parent, not the only existing person of his kind. And so in the Greek translation of the book of Tobit, when Raguel praises God for having mercy on δυο μονογενεις (8:17), he does not mean that his daughter Sara and Tobias were two “unique” persons; he means that they were both only-begotten children of their fathers. In Luke’s Gospel, the word is used in reference to an only child in 7:12, 8:42, and 9:38. In the Epistle to the Hebrews, it is said that when Abraham was ready to sacrifice Isaac he was offering up τον μονογενή, “his only-begotten” (11:17), because although Abraham had another son, God had said that only in Isaac shall Abraham’s seed (σπερμα) be named. … 1 When the word μονογενής is used in reference to a son or daughter, it always means “only-begotten.”

… In four of the five places the word is used as an adjective modifying “Son,” and in one of these (1:18) the Son is said to be “in the bosom of the Father.” In the one place where it occurs as a substantive (1:14), it is followed by the prepositional phrase “from the Father,” which implies sonship. And so we see that in every occurrence John is using the word as a biological metaphor, in which Christ is the “Only Begotten Son” of the Father.

Is there any doctrinal importance in this? Yes, there is. The biological metaphor, in which the Son (and only the Son) shares the genus of the Father, conveys the idea that Jesus Christ is a true genetic Son, having the same divine nature or essence as the Father. The meaning of the word μονογενὴς here is not just “only” or “one and only,” as in the RSV, NIV, and ESV translations. John is not saying that the Son is “one of a kind.” He is saying that Christ is the second of a kind, uniquely sharing the genus of the Father because he is the only begotten Son of the Father, as in the KJV, ERV, and NASB. In the early centuries of Christianity, this point of exegesis acquired great importance. During the fourth century a teaching known as the Arian heresy (which maintained that the Son was a created being) threatened the Church, and in response to it the orthodox Fathers emphasized that the Scripture speaks of a begetting of the Son, not a creation. On that Scriptural basis they maintained that the Son must be understood to be of the same essence as the Father (ὁμοούσιος τῷ πατρί). They further explained that when Scripture speaks of this “begetting” it refers to something taking place in eternity, not within time, and so there were never a time when the Father was without the Son. The orthodox teaching on this subject was set forth in the Creed adopted by the Council of Nicæa in A.D. 325: …

The truth is, those who do not acknowledge this meaning of the word μονογενής in the Johannine writings are themselves dogmatically motivated. Their preferred translation—“only”—is an undertranslation which hides from view a Scriptural datum that supports the Christology of the ancient Creed but which happens to be unpopular with modern theologians.

There is a tendency among modern theologians to “divide the Substance” of the Godhead (cf. the warning against this in the Athanasian Creed) by positing such independence and equality of the Persons of the Trinity that we can no longer conceive of them as being one God. Some modern theologians have little use for the term ὁμοούσιος (“one essence”), and they cannot abide the idea that there is any ontological priority of the Father in the Trinity, because this is too “hierarchical” and “patriarchal” for our egalitarian age. The Son and the Spirit must be made totally equal to the Father in all respects, even if it means making them into three Gods. This trend is largely driven by liberal theologians who favor the new “social Trinity” concept (Moltmann being prominent among them), which imagines the Trinity to be like a voluntary society of persons who are not ontologically connected.

Among the more conservative thinkers there are also some who have criticized the Nicene Creed because they refuse any explanation of the relationship between Father and Son which describes the Son as being secondary to the Father in his “mode of subsistence.” In their view, it “detracts from the glory of the Son,” as Robert Reymond puts it. This appears to be an over-reaction to modern Unitarianism. Reymond claims that John Calvin was also opposed to the “eternally begotten” teaching of the Nicene Creed for this reason, but he has misinterpreted Calvin. We see a good motive here, because Reymond wishes to defend the divinity of Christ, but he is still wrong. Tritheism is no less heretical than Unitarianism.

One often encounters in liberal writers some statement to the effect that the Nicene doctrine of eternal generation derives from the emanationist metaphysics of ancient pagan philosophy, rather than from the Bible. Not that they care what the Bible says—they only wish to discredit the Nicene Creed in the eyes of those who do care what the Bible teaches. Unfortunately, in recent years this idea has been picked up by some relatively conservative theologians also, such as Paul Helm. In lectures and articles he has repeated this canard, alleging that the Nicene teachings concerning the begetting of the Son and the procession of the Spirit “derive not from the New Testament but from pagan philosophy, from Neoplatonism.” But anyone who is really familiar with Neo-Platonism will readily see how implausible it is to maintain that the Nicene Fathers borrowed any element of their Christology from this pagan philosophy.  …

Finally, it must not be supposed that all translators who have preferred “only” over “only begotten” are deliberately undertranslating the word μονογενής for theological reasons. Many translators simply wish to keep their translations simple and idiomatic, and the word “begotten” does not commend itself to those who are trying to translate the text into a familiar and contemporary style of English. It may also be that some translators prefer to leave out the “begotten” because they fear that laymen will misinterpret this to mean that the Son had a beginning in time. Unfortunately, by failing to convey the “begotten” component of meaning in the word μονογενής they are in effect discarding centuries of careful theological exegesis, and it seems that we can hardly afford this loss in our generation. We need more theological literacy in the churches today, and it is not helpful when translators strip theologically important words from the text of the English Bible. The rendering “only begotten,” or some other equivalent expression, should at least be indicated in the footnotes of English versions, and it is the duty of pastors to explain what this means.”

Leave a Reply to The Sabbath Complete Cancel reply