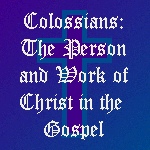 Each of Paul’s epistles surveys the good news from a somewhat different vantage point. Romans speaks of mankind’s condemnation because of sin, and the justification available by faith through Christ’s shed blood. Ephesians teaches salvation by grace through faith, and that believers have been raised together with Christ in the heavenlies.

Introduction to this Colossians Study

The study of the book of Colossians has impacted the way that I understand the gospel. It has helped to clarify the relationship between Christ’s work and our work in salvation. It has increased my knowledge of the place and purpose of certain observances from the Mosaic law (such as circumcision, the Sabbath and food laws), and has revealed the place of the old covenant shadows in the larger context of what they point toward and their fulfilment in the new covenant.

In Colossians, Paul systematically examines the person and work of Christ, and how that these great themes form the substrate of the completeness of the believer in Christ. This is the first part of a series of articles which will briefly examine the biblical teaching of salvation in Colossians. This salvation is not based on who we are or what we have done, but only on Jesus; who He is, and what He has done. We partake of this salvation by faith, and out of that flows the obedient and holy life of the believer.

I detect a particular logical form in Colossians. I will devote at least one chapter (blog post) to unpack each of the following thoughts:

We will briefly examine the key phrases that Paul employs to describe these points of the gospel. They are systematic and sequential, building one upon the other. Paul asserts that Jesus is the infinite and divine creator, which forms the basis for the value of his work. And because of the perfection and infinite value of his work, we are “complete in Him, in whom is the head of all principality and power” (2:10).

This idea is the distillation of gospel truth – that Jesus is not only essential for salvation (as if there was more to the gospel than Christ), but that he is sufficient for salvation – that he alone fills all of our needs.

Part One: The Supremacy of Christ’s Person in Colossians

See to it that no one takes you captive by philosophy and empty deceit, according to human tradition, according to the elemental spirits of the world, and not according to Christ. For in him the whole fullness of deity dwells bodily. Colossians 2:8-9 ESV

Paul is teaching that the Son is an essential part of the Godhead, and indispensable to the acts of God (creation and redemption). As Jesus said in John 5:19, “For whatever [the Father] does, the Son also does in like manner.” If the Father is creating a world, the Son is also creating a world.

The gospel in its fulness hangs upon the supremacy of the nature of Christ’s person. Paul realizes that if Christ is anything less than fully God, his work and mission would be meaningless, and without redemptive value.

He is the image of the invisible God. This implies that God the Father can not be seen; he is invisible.

Who alone has immortality, dwelling in unapproachable light, whom no man has seen or can see, to whom be honor and everlasting power. Amen. 1 Timothy 6:16

When God appears, it is the Son that is seen. The Father and Son exist inseparably, like the seen and unseen parts of a person. If the Son did not exist, the Father would be without image or visible form. This shows us the closeness of the Father and Son, and the essential place of the Son.

No one has seen God at any time. The only begotten Son, who is in the bosom of the Father, He has declared Him. John 1:18 NKJV

The firstborn of all creation. This does not mean that Jesus was created at a point in time past; this phrase is explained by the words that follow it: that by Him, through Him, and for Him, all things were created. He is Creator, not creature.

All things were made through Him, and without Him nothing was made that was made. John 1:3

“Firstborn” is a title of honour and preference (see Ex. 4:22). Jesus is above all creation, because He brought everything into existence, and they were made for Himself. Even the demonic “principalities and powers” (compare 2:15) were made by Him, and serve a purpose in His grand design. Jesus is Lord; all things are under his control.

He is before all things, and in [or, by] Him all things consist.. The Son is separate from creation – he is before all “things”. The entire universe is held together by the word of His power.

Beware lest anyone cheat you. Through philosophy and empty deceit, false teachers will draw people away from the sufficiency of Christ in the gospel. Rather than being complete through the blood he shed on the cross (1:20-22) the forgiveness that we have thereby (2:13) and the demonic powers that were overturned there (2:14), many seek their spiritual completeness in works (do not touch, taste, handle, 2:21) and ceremonial rituals that they perform (Sabbath, feasts, new moon, 2:16).

In Him dwells the fulness of Deity bodily. Others teach the error that Jesus was only a good man, or perhaps the most noble and exalted of God’s creatures. This is another deceitful philosophy that serves to empty mankind’s soul of hope, and either propel them toward a complete and total rejection of God, or chain them to the relentless pursuit of religion and good works for salvation. Paul makes the nature of Christ’s deity plain when he states emphatically, “In Him dwells all the fulness of the Godhead (or, Deity) bodily. (2:9)

Conclusion: You are complete in Him. This understanding of the person of Christ is essential to understand the value of the sacrifice that Jesus made in our behalf. It affects our view of sin and righteousness, of the preciousness of the blood of the covenant which was shed for the remission of our sins. It gives us perspective of the enormity of sin, and the helpless situation that we are in.

If we bypass or dilute the truth of Christ’s person, the gospel becomes meaningless. When it is embraced, however, the gospel is able to shine forth in its glory. We are complete in Him because of who he is, and what he has accomplished. He has done for us what we could never do though efforts of our own.